How's this for an inventive use of a basket? 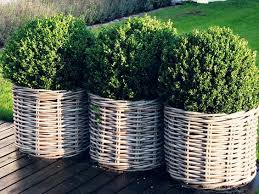 This is a really easy look to achieve using the small, medium and large unlined baskets, or even the lined baskets for an extra touch of luxury. You could even paint them to match your decking.

Send us pictures of your wicker projects!
Posted by Unknown at 02:20 No comments:

Email ThisBlogThis!Share to TwitterShare to FacebookShare to Pinterest
Thyme and Season


The steps to making your own basket Part 4:

Time for a bit of cuteness, in a trug ! 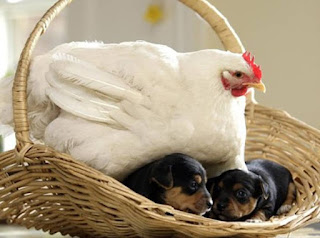 Email ThisBlogThis!Share to TwitterShare to FacebookShare to Pinterest
Thyme and Season


The steps to making your own basket Part 3:

Steps to making your own basket


The steps to making your own basket Part 1:

For thousands of years people have woven baskets using the natural materials available to them, like willow shoots and reedy grasses. Basket-weaving today is both a practical skill and a serious art form. If you follow the steps outlined here for making a wicker basket, the result will be a basket functional enough to use around your home and beautiful enough to put on display. See Step 1 to get started. 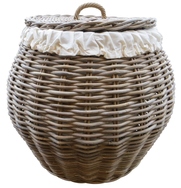 Thyme and Season are pleased to say our ever popular oval, antique log basket will be back in stock mid March 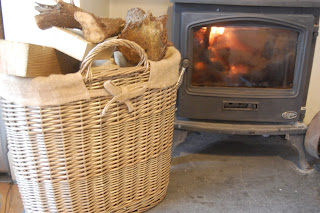 We specialise in creating imaginative and original baskets for storage for the home or for retail display. Our stock holding, product quality and service levels for supply of kitchen drawer baskets, bathroom and bedroom storage, product display or even as log and kindling basket is without comparison.
Posted by Unknown at 06:55 No comments:

Today I came across an amazing glossary of tools and techniques used in basket making.
We often use some of these terms without realising their origin, and appear in the Thyme and Season shop site

Well worth a read over a cup of tea !

HERITAGE OF BASKETMAKING
TOOLS USED IN WILLOW BASKETMAKING
Bodkin/awl/fid
A bodkin is essential when basketmaking. It is useful to have several in several sizes and diameters. A good general purpose bodkin has a metal spike that is around 5” long and that tapers gently towards the tip and a wooden handle. (When buying the size usually applies to the length of the metal spike). Larger bodkins are used when inserting handle bows in the sides of the basket. A fine bodin is good for small work.
An awl is usually all metal and does the same job.
Sometimes you need to rap down on the wooden end of the bodkin when working so it should be strong enough to take this treatment. A selection of bodkins of different sizes.
A fid is a tool used in rope and sail making. It can be a useful tool for basketmaking because it has a hollow side that allows you to thread a willow rod through without taking the bark or skin off the willow. A shell bodkin performs the same task, this tool is commonly used when seating a chair with cane. Shell bodkin
Brake
This tool is used when stripping the bark from the willow rod to produce white willow. There are several designs, two pieces of metal are sprung together so that the rod can be pulled through. It is held firmly in a post in the ground. Stripping may also be done by a machine but in the past women and children did the white willow stripping rod by rod and this always took place in the spring when the sap was rising using rods that had been overwintered in shallow ‘pits’ of water to keep them alive. Bake for peeling willow by hand for white rods. This would be clamped to a sturdy post and the rod pulled through the sprung metal bars
Formers
Generally made from wood, these are used as aids for shaping. They range from simple hoops that can be attached or put around the uprights to keep them in position to moulds that help to form complex shapes. A thick willow rod may be formed into an oval around a shape cut out of ply or a lobster pot may have the ‘mouth’ made by inserting rods into a thick wooden post.
Greasehorn
This was usually a cow’s horn filled with a mixture of tallow (animal fat) and horsehair. The bodkin was inserted in this before using it and the tallow made sure that the bodkin was ‘greased’ which helped when inserting stakes into a base or a bow for a handle. Hammers
A small woodworker’s hammer is used to tap in small pins to secure the weave on a lid or when there is a post with a discontinuous weave for example on the gap of a dog basket.
In square work a hammer is used to knock the side stakes into the thick outer sticks of the base. For this a hammer weighing at least  2lbs with a leather head is most suitable. Knives
A shop knife was usual in the workshops. A suitable knife for basketry could have a straight or curved blade. Straight bladed knives were more common in England, curved ones in France.
When choosing a knife suitable for basketry, it should be strong and fit the hand comfortably. An Opinel knife found in most good hardware stores is suitable, always remember to lock the blade so that it can’t fold up on your hand. Knives should always be sharp in order to cut safely,  a whetstone or diamond sharpener is essential. Picking knife
This knife with a curved or outward facing blade was used for ‘picking off’ or trimming any unwanted ends of willow once the basket was finished. It needed skill to press down and only cut the rod that was to be discarded without cutting through the weave. Today shears or secateurs are generally used instead for this job. Plank and lapboard
Sitting ‘on the plank’ is the traditional way of working. The plank is a long board, a general measurement would be 6’ long x 2.6” wide. It sits a little above ground level. The basketmaker sits at one end of the plank on a thick cushion with legs outstretched and the ‘lapboard’ on which the basket is woven is held on his thighs at one end, at the other it sits on the plank. In this way the willow rods are to hand, on the left hand side, and the tools are on the left. The underfoot bases of the baskets were also made ‘on the plank’ with the maker standing on them. Colin Manthorpe sitting on the plank making a herring cran at the 2003 Basketry and Beyond Basket Fair and Water Gala. The lapboard is raised up on a wooden box.
Today basketmakers often choose to have a bench or an arrangement that allows for a variation of heights at which to work because working on the plank is very hard on the back.
The ‘lapboard’ is a smaller board (sizes vary) with an extra piece of wood at one end so that it sits higher at the front than the back and sloping towards the end of the plank when the basketmaker has it in position. It may have a series of holes drilled down the centre where the basket can be pinned down using a bodkin. The basket is held on the lapboard so that the maker is looking at the sides and not down on the top.
Rapping irons
These tools are used to compact the layers of weaving by beating them down. A useful weight for a metal rapping iron is between 1 ½ – 2 lbs. Heavier irons are used for larger work, for example, balloon baskets. Some have a ring at one end that is used to straighten uneven sticks. A commander is a special tool used to straighten large sticks by putting pressure on any unwanted bends or curves using the dog leg end.
A wooden rapping iron is useful when working with brown willow as it does not damage the bark. It needs to be made of a dense wood, box or fruit wood and sometimes wooden rappers have metal bars inserted in them to make them heavier. A selection of rapping irons of different designs and weights; a very fine one at the back useful for fitching, a wooden one in the centre, the tool at the front is a commander
Shaving horse
This is a specialised piece of equipment used for green woodwork but is also very useful for shaving down thick split willow pieces for use in basketry, for example as runners on the bottoms of baskets. The ‘horse’ or ‘mare’ is wooden, three legged and has a bar that is held down by pushing forward with the feet to grip the splint being shaved.  A drawknife is used for doing the shaving. The shavehorse with a drawknife
Shears or secateurs
These are used for cutting or trimming the willow rods. The blades should be of the ‘bypass’ not ‘anvil’ design in order to make a clean cut. A narrow blade at the tip is useful so that the cuts can be made close to the work. Skeining tools and cleaves for larger split work
A set of skeining tools were used when making ‘skeins’; thin ribbon like pieces of willow for lapping handles or when doing very fine work.
Cleave: This was a tool, generally wooden, used for splitting willow into three or four down the length of the rod.
Shave: A tool for shaving the pith from the back of the skein, generally an adjustable blade held horizontally in a metal or wooden framework.
Upright: Two blades at an angle, held vertically in a metal or wooden framework, the skein was pulled through them to take off the edges and ensure an even width. Two wooden cleaves, on the left a large three-way cleave for splitting large sticks, on the right a small three-way cleave used for smaller rods
Soaking tank
Dry willow needs to be soaked in water to make it pliable enough to work. A galvanised tank such as those used in fields for providing water to cattle is used. 8’ is a good length. A tap or plug needs to be put in at one end so that it can be drained and cleaned easily. To hold the soaking willow under the water pieces of wood exactly the width of the tank that will fit under the rim should be cut, or the willow may be held down by a piece of galvanised wire attached at each end to a brick or weight. Weights
A selection of weights of between 2 – 7 or more pounds is useful. They are used to hold the work down on the lapboard when working. If the weight has a hole in the centre the work may be pinned to the board with a thin bodkin, still allowing it to be rotated. A selection of weights

We all need wicker baskets

We all need wicker storage baskets ! 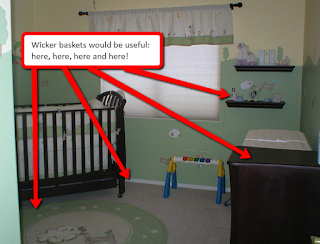 Soon be time to dust off the bike, buy a new bicycle basket and get out in the spring sunshine.

Great range of bike baskets from Thyme and Season 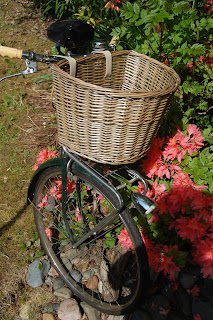 Email ThisBlogThis!Share to TwitterShare to FacebookShare to Pinterest
www.thymeandseason.co.ukWarm and cosy with a Thyme and Season log basket ! 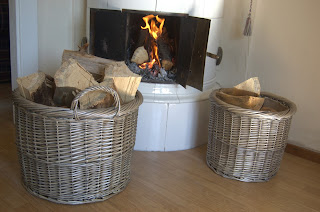